As business consultant extraordinaire, Peter Drucker, once said, “What gets measured gets managed.” In order to reach your revenue goals, you need to be measuring your input, existing performance and considering the levers that can be adjusted in order to hit your target – otherwise there’s no way of knowing how close you are to reaching these aspirations. In sales, this is directly affected by your productivity.

Perhaps you want to increase revenue but don’t know how to go about calculating the activity you need to input? So often, we set targets yet don’t know how to realistically go about meeting them. This is setting ourselves up for failure; a set-it-and-see approach has no place in the modern world of business.

In this post, we’ll offer you simple tips to follow when setting your sales productivity metrics. So if you’re hiring your first sales rep, expanding your sales team, or are responsible for picking up the phone and making those sales calls for yourself, you can work out a realistic, achievable set of targets and leading indicators.

1. Start with the revenue target

Deciding how much revenue you need to generate is question number one.

If you’ve got a sales team, you’ll be keen to set them challenging yet attainable sales metrics goals. Even if you’re responsible for closing deals yourself, you’ll want to be making better use of your time and resources. To do this, you need to start with the figure your business is aiming for; for the sake of this blog post, we’re setting this at £1,000,000. Now you need a way to track progress towards this target, rather than merely hoping for the best.

It’s a good idea to work backwards from this target, digging into the data you already have in your CRM or sales records. Using HubSpot, or another CRM, you can dive back into your metrics and chart both your productivity and outcome metrics. The information you are looking at includes:

Your business might use different names for these activities (eg discovery calls or closing calls), but the pattern should look familiar. Knowing as much as possible about these numbers will allow you to predict how many of each you will need to make in order to fulfil your revenue target.

For example, starting at the end with deals closed, you might work out that it usually takes three proposals to get one deal. It might take nine advise calls to reach the proposal stage. And so on – break it down until you know how many connect calls you need to make, or prospects you need to identify initially, in order to meet all your other numbers.

These figures form a funnel, starting with a large volume of calls at the top (your connect calls) and with each step in the process, more and more prospects will drop off, until you’re left at the bottom with a much smaller amount of deals you actually close: 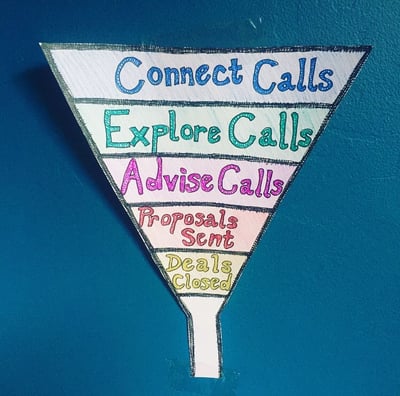 Top tip: Set yourself up for a strong month by hitting your connect calls target in the first week, giving you the rest of the month to hit your other targets safe in the knowledge that you've built a strong pipeline.

Crucially, you will have that pipeline generation figure so you know how many prospects you need to reach out to in the first place in order to meet your other targets.

2. Working out your numbers

It’s easiest to work out the kind of input you need to put into your sales efforts, if you can find out the average percentages of success at each stage in your current funnel. You’ll also need to be able to work out what your average deal size is. Follow these steps to give yourself these useful figures (we’ll assume these figures are per quarter):

If you know you close roughly 50% of deals, you can work out that you’ll need to send proposals totalling double your revenue goals.

For example, if you closed 20 deals, you’ll need to send out 40 proposals.

If your advise calls have a 75% success rate of becoming proposals, you can find out the number of advise calls you’ll need to make.

For example, if you have 40 proposals to send, you’ll need to conduct 53 advise calls.

For example, if you made 53 advise calls, you’ll need to make 70 explore calls.

For example, if you made 70 explore calls, you need to make 140 connect calls first.

Prospecting can be even trickier, you might work out that you have a 20% success rate.

For example, if you need 140 connect calls, you’d initially need to reach out to 700 prospects.

Working out your numbers in reverse, based on data you already have, is the most logical step towards working out what you need to do to achieve your goals. Director of Growth, John Kelleher recommends:

“When planning your sales performance metrics, you've got two levers you can pull – quantity and efficacy. Either plan to improve the quality of your calls, leading to an improved conversion rate, or plan to increase quantity.”

You also need to consider – what is your average deal size? Let’s say you generally make £4,000 per deal – some deals will be larger, some smaller, but in order to make these numbers work, calculate the average deal size.

Therefore, if you want to make £1,000,000 revenue in one year, you can deduce the following about your current performance:

This is a good start, but you need to make more than triple this number in order to hit your target. If you triple every single number, it would mean you or your sales rep needs to be making around 800 sales calls per quarter – as John says, there's every chance you'll want to consider focusing on efficacy in order to reduce this productivity metric!

Depending on your resources, upping the number of calls made and prospects reached may not be the appropriate change to make. There are other things you can do that are more realistic, yet will still help you reach your target.

Once you’ve picked your time frame – for example, making £1,000,000 in a year – you need to consider if conducting that number of calls is realistic for your business, or if one of your other ‘sales levers’ needs to be pulled.

There are 3 ways to grow your business:

Remember to take your quota and divide each element in the funnel by 12 to give you your monthly target over a year. This gives you a more manageable target as an idea of how much revenue to close – and means you won’t overwhelm your sales team with scary numbers.

If you aren’t already measuring these metrics, you need to start. Especially if you’ve got ambitious revenue goals to start meeting. Once you have an idea of the numbers you’re currently hitting, you can consider recruitment expansion, where to use your existing sales team best, and what a realistic revenue target is for your business. You’ll also be able to consider where your flexibility lies and the points you’re willing (and not) to tweak in order to reach your goals.

Making a case for case studies: why your business needs them

Case studies separate you from your competition, offering real-life anecdotes, testimonials and data about your business – so, are you doing it right?
Read More
by Anna Kaine on 15 May 2019
Sales

Making more calls and spending longer in the office isn’t the only way to increase revenue – here’s how to meet your goals in other savvier ways.
Read More
by John Kelleher on 29 Jan 2020
Inbound marketing

How much should you spend on marketing?

It’s easier than ever to account for your marketing budget and calculate ROI – ESM Inbound explores why and how to set realistic marketing goals.
Read More