You’ve finished your discovery call. The prospect loves everything you described and is clearly keen to get started. You know they’re ready to sign… but now you need to send them a proposal.

You load up Microsoft Word and start ‘copy and pasting’ chunks of text from previous proposals. You customise a few sentences and then you use ‘find and replace’ to make sure that none of your previous prospects' names find their way into the document.

Satisfied that everything looks right, you save it as a PDF and send it to the prospect by email.

It's the news you want to hear but wouldn't it be better if the document looked perfect on any size of screen and the esignature process was intuitive?

While most companies have solved the esignature problem, thanks in no small part to the sudden remote working challenges of the pandemic, many are still using PDFs, Word documents and even PowerPoints to send proposals to prospects.

In an age of responsive websites and mobile apps, receiving a PDF looks okay on a computer screen but awful on a smartphone. It’s not the user experience you want your prospects to have right before signing up to your service.

Today, there’s no shortage of options when it comes to proposal software. Two popular apps are Proposify and Pandadoc but both of them send documents that are formatted like a PDF - an A4 or ‘letter’ sized document that isn’t designed to be responsive for the recipient.

One company taking an alternative approach with their proposal software is Qwilr.

Attachments are not the future of documents

Qwilr says that they “believe that the future of documents is online” and not as attachments but as webpages.

And, they have a point.

In all walks of life, apps are increasingly leaving behind concepts that made perfect sense in the physical world but are less meaningful in the digital world.

Note taking apps, for example, are making less and less use of page, notebook and folder analogies - with OneNote perhaps being the ‘notable’ exception here. But even OneNote gives up on the idea of an A4 page in favour of an infinite canvas for the page itself.

News websites have long been formatted as a web page, embracing embedded videos, tweets and TikToks rather than trying to replicate the look and feel of a traditional newspaper.

Trying to make something digital resemble something physical (what’s known as skeuomorphism) is an increasingly outdated design choice.

An A4 piece of paper is acceptable on a laptop screen but it looks a lot better if you do the unthinkable and rotate your laptop 90 degrees... 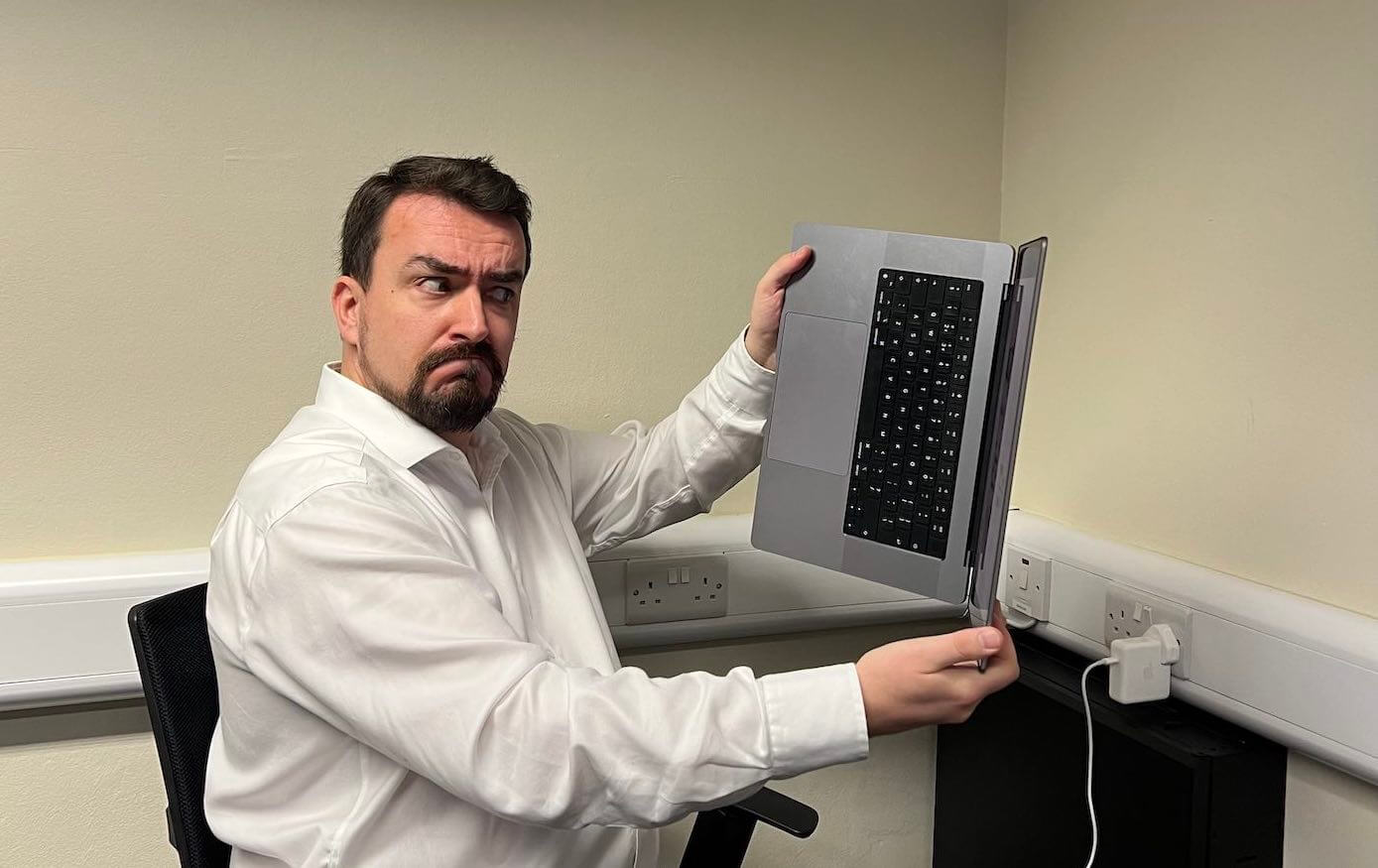 Qwilr saying that the future of proposals better resembles a webpage than an A4 PDF is an entirely reasonable statement.

Until the metaverse takes hold and really rewrites our understanding of what’s possible in the digital world, I think we’re going to see an increasing trend towards responsive webpages as the future of how we send documents and, in particular, proposals.

So, let’s look at the experience of sending a proposal with Qwilr.

Creating a proposal with Qwilr is a pretty straightforward affair. Creating a blank page gives you an empty template in a simple visual editor interface. 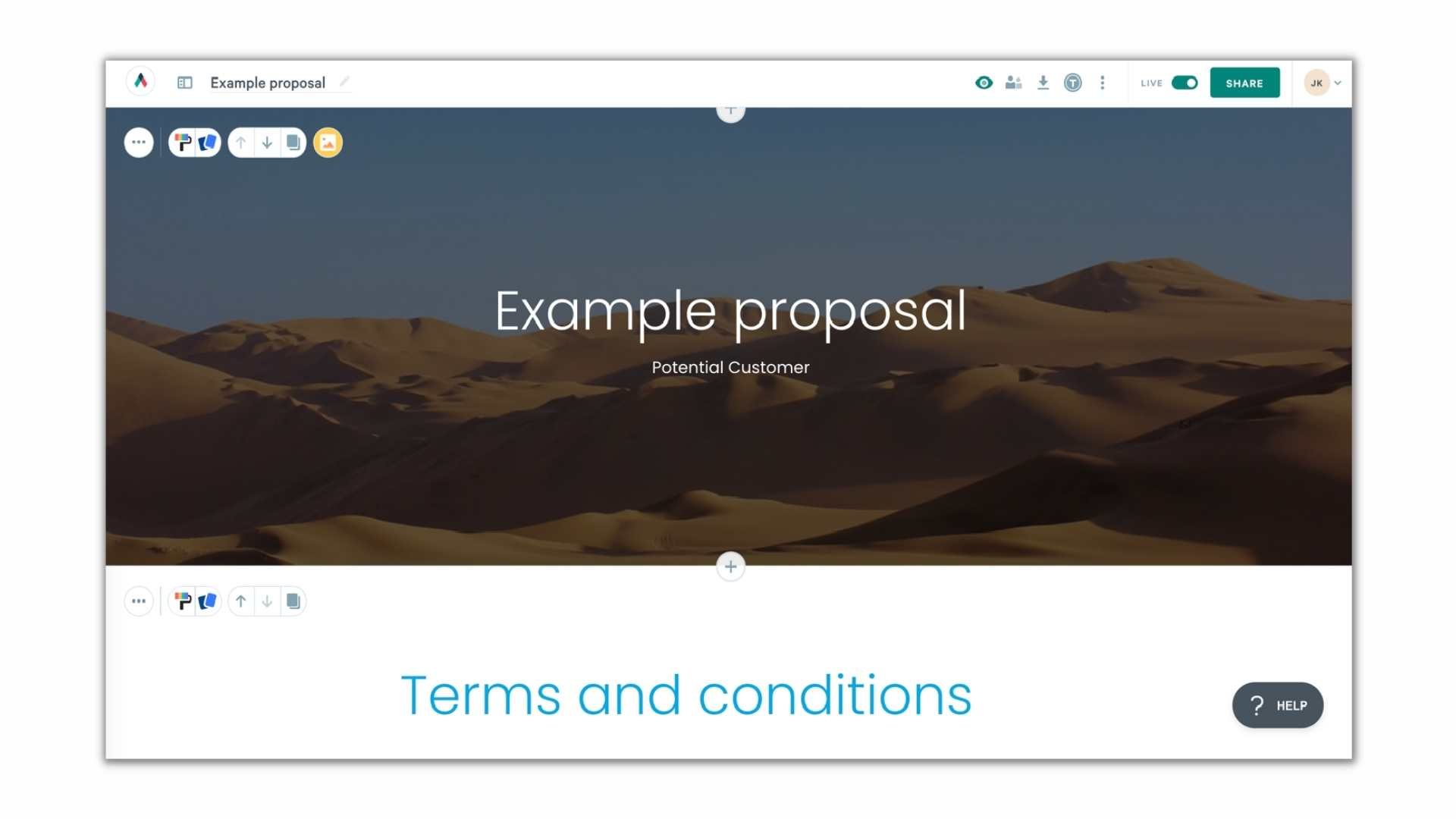 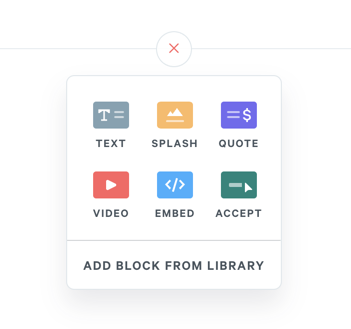 Beyond that functionality, the content editor is very straightforward and easy to use.

You can easily move blocks up and down the page, change background and text colours and configure currency types. Otherwise, there’s not a lot that you can do on the page.

And that’s perfect for Qwilr’s main use case - enabling sales teams to quickly get proposals out of the gates. Proposals sent with Qwilr look great. And it takes very little effort to create one of these superb looking proposals.

As an administrator, you can even set the default colours and fonts in a very simple brand editor so that everything looks consistent with your business identity.

If you’re a salesperson looking to get a proposal out quickly, then knowing it’s going to look great is both reassuring and, even today, it’s a competitive advantage compared to competitors sending PowerPoints, Word documents and PDFs.

Prospects will remark on the proposals you send with Qwilr.

Templates and the block library

While creating a blank proposal is fine, using the templates function is where Qwilr really shines.

Integrated with your CRM, you can create a proposal template that automatically pulls information from contacts, companies and the deal (or ‘opportunity’) object, meaning that your entire proposal can be written for you in just a few clicks.

Placeholders for your CRM content can be created using either a drag & drop editor or with curly brackets such as .

In fact, you can even combine those placeholders with a middleware platform like Zapier, which allows you to enter further information from other tools.

You’re then able to edit the specific text as necessary or, better still, add in pre-approved content from the ‘blocks library’. This feature is an absolute dream to use and allows you to have content ready to go for your different products or services that might be available as add-ons to a standard proposal.

In this example, we’re inserting the text for an SEO audit with little more than a couple of clicks.

The blocks library isn’t a unique feature for proposal software but the implementation here is an absolute joy to use and will help sales reps to get proposals into prospects' hands significantly faster.

This combination of pulling in data from your CRM, a simple content editor, branded templates and a library of custom blocks gives Qwilr a genuinely distinct advantage compared to other solutions that we’ve tried.

While that CRM integration makes proposal creation incredibly simple to use, the integration is less impressive when you need to automatically process an accepted proposal.

Qwilr integrates well with CRMs when it comes to pulling data out of your database and, for HubSpot at least, showing Qwilr activity in the contact’s timeline.

When a proposal is signed, however, there’s no native way to mark the associated deal as being closed-won, which means that the sales rep has to depend on an email or Slack notification and then they need to manually move the deal to closed-won.

You can’t change this in Qwilr itself nor is it possible to build an automation with your CRM that takes the already associated proposal and updates the deal stage - because the ‘proposal accepted’ trigger only exists in contact workflows - not deals.

For most sales organisations, this just isn’t good enough because it would mark every single deal associated with that prospect as closed-won. And, in most sales scenarios that just isn’t true. Not every proposal gets signed and you might find yourself sending different options to a prospect for the same deal. It’s important that Qwilr works to improve this part of their system.

Working around the automation limits

When we looked at the Qwilr API and its Zapier integration, we found that the system doesn’t even send the associated Deal ID as part of the ‘proposal accepted’ payload. That means you can’t look up the right deal via the API or a 'search' action in Zapier.

You can watch a video about that automation by clicking here:

This was the best option for building an automation for closing the right deal when a proposal is signed but it’s just… awkward.

We’ve even had to build another automation that lets people know when they’ve forgotten to associate a Qwilr proposal with a HubSpot deal. An automation that we affectionately call 'Muppet Bot'... 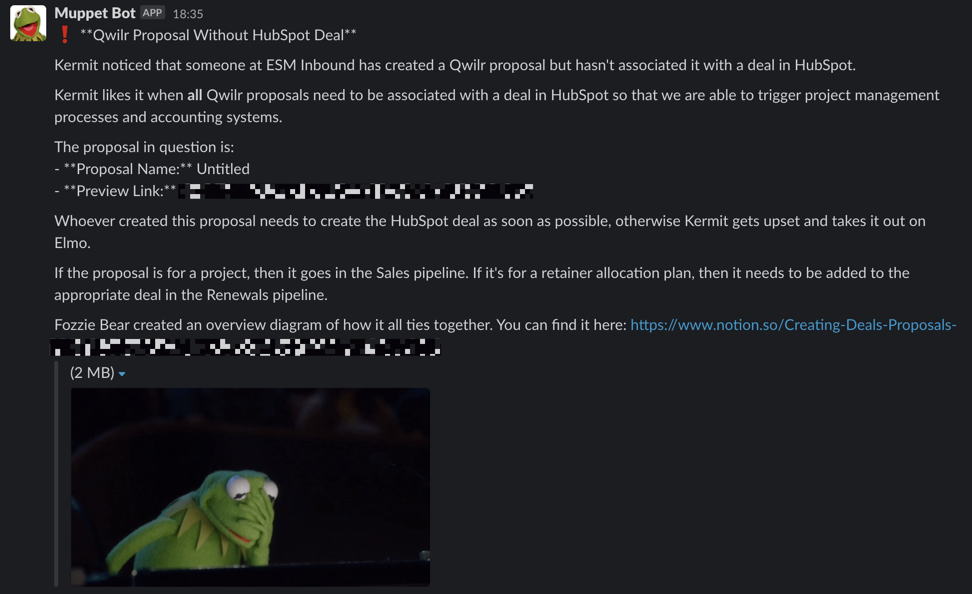 It’s one of our most commonly triggered internal automations and it just shouldn’t be necessary - Qwilr should know which HubSpot deal it's associated with.

Otherwise, Qwilr’s integration features are excellent. With the proposals themselves being webpages, it opens up the possibility of adding tracking code, chatbots and all manner of other software options to your proposals.

The Zapier integration is also very welcome. While our closed-won automation is unnecessarily complex, at least it works. And that would be much harder to build without the simplicity of an integration with the most well-known middleware platform.

Regardless of what you’re trying to automate with Qwilr, you can be confident you can find a way to do it, even if is has to be a little more awkward than would be ideal.

Should your sales team invest in Qwilr?

So, with all that said, would we recommend Qwilr as your proposal software?

If your business requires detailed proposals that include client-specific information, then Qwilr is (to our mind) the best solution on the market at this time. So much so that it’s the proposal management software used by the Services teams at ESM Inbound.

If, however, your proposals are more straightforward, if the text and imagery in every proposal is identical (or you have a very limited number of proposal types that never need to be customised), then you’ll probably find yourself better off with HubSpot’s Sales Hub and using the Quotes tool. It’s built into a CRM, it’s entirely native and you get around the awkward process for creating an automation for when a deal needs to be marked as closed-won.

We’ve tried plenty of alternative proposal solutions and none of them stuck. Qwilr was a fast hit for our team, and our clients frequently comment on how much they like the proposals we send.

If you work in a services business or you create custom solutions for your customers, then Qwilr is absolutely the tool to use.

Looking for a 10% discount with Qwilr?

This post is not sponsored by Qwilr but ESM Inbound has secured a discount code you can use to get 10% off your Qwilr subscription.

Enter 'ESM10percent' as your promotional code during the checkout process.

ESM Inbound's content includes affiliate links. This means that we may receive a commission if you make a purchase through one of the links on our website. This will be at no cost to you and helps to fund the content creation work on our website.

ESM Inbound is delighted to announce that we are now a HubSpot Gold Agency Partner. Find out what that means for our clients and their school customers.
Read More
by John Kelleher on 15 Oct 2018
HubSpot

As of 15th October 2018, ESM Inbound is officially a HubSpot Platinum Certified Agency Partner. Find out what this means for our customers.
Read More
by Anna Kaine on 09 Sep 2020
Inbound marketing

5 things your inbound marketing campaign might be missing in 2020

From voice-search SEO to paid Google Ads, this post by ESM Inbound reveals how to take inbound marketing strategy to the next level in 2020.
Read More